I won’t have my usual article this week. I want to use my free time following updates about the flooding in Manila, which happens to be my home country’s capital. The widespread flooding was due to tropical typhoon Ondoy (international codename Ketsana) that brought record-breaking rainfall. The most affected region of the Philippines is the Greater Manila area which has a population of around 20 million people. A state of national calamity has been declared over 27 provinces in 7 regions.

According to PAGASA (Philippine Atmospheric, Geophysical and Astronomical Services Administration), the average rainfall in Manila during September is about 390 millimeters.  But last Saturday, according to the Philippine Inquirer, the typhoon poured 340 millimeters of rain in a period of six hours. This is more rain than 2005’s Hurricane Katrina in New Orleans. The six-hour flood surged across Manila and submerged houses, swept away thousands of cars and turned main thoroughfares into raging rivers. It forced residents to seek refuge on rooftops where some waited for more than 24 hours.

According to Philippine Star, the typhoon left the country yesterday, leaving behind a trail of 95 people dead, 29 missing. According to the NDCC (Philippine National Disaster Coordinating Council), the number of affected people across Luzon has swelled to more than 300,000 people. This agency also reports that the partial total number of evacuees has reached nearly 60,000 people in 118 evacuation centers.  The Philippine government expects those numbers to rise. 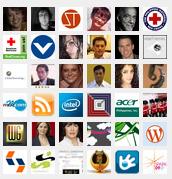 I followed updates regarding the flooding from Facebook, where friends and groups posted up-to-date photos and news of what was happening on the ground. Many of those sites turned into assistance centers and channels that ask for and provide support for rescue and relief efforts. Through social media, I saw the resilience of the Filipino people in the face of adversity — showing once again our strong Bayanihan spirit.

I am also overwhelmed by the support of famous people in twitter like Aston Kutcher, Josh Groban, Demi Moore and Paulo Coelho. They have helped rally support for flood victims in Manila. These celebrity twitters have huge followings—Aston has 3.7 million followers online. Below are retweets from their sites.

I have started my own donation drive here in the US starting with my friends. We will be sending voluntary donations through CEMEX Philippines Foundation. This can assist poor families in the evacuation centers who lost their homes and belongings. If you want to help also, please let me know. Our assistance, however small, goes a long way in my country; a dollar can buy half a kilo of rice and some canned goods that can feed a family a single meal while $20 could feed a family for a week.

Thank you for taking time to read this article. I will continue to post updates and news about the aftermath of the flooding and relief efforts of different concerned groups.